Also on this road was S. alba growing among rocks on the right of the road – in bud but not yet in flower (BB209). S. frankiana was growing in a grassy area on the left of the road. The two species are only about 10 m apart. In fact, four distinct Sulcorebutias were growing in a distance of only about 10 km. 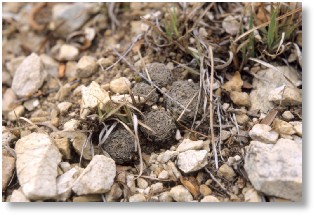 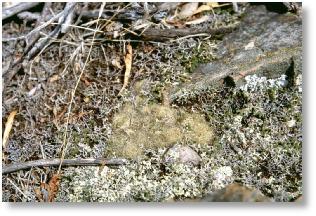 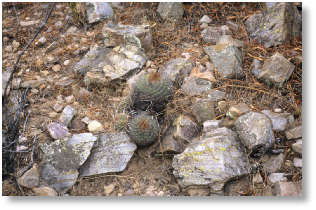 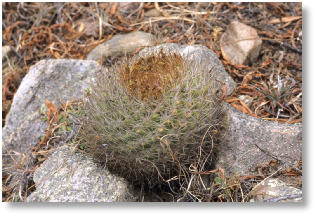 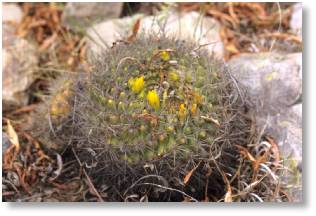 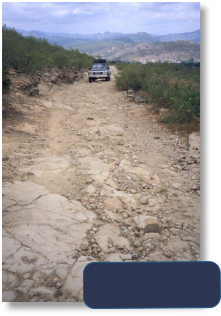 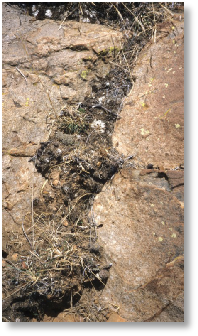 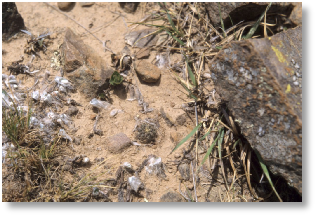 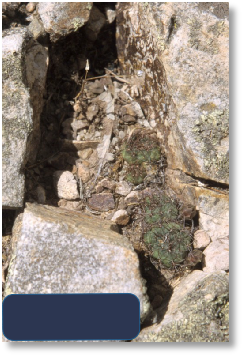 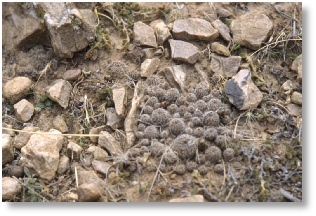 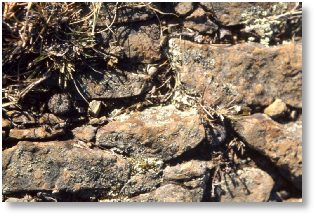 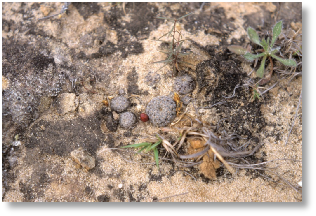 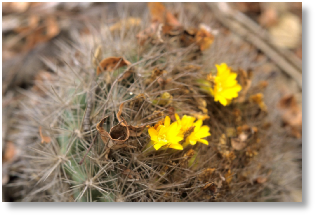 The road to the site

The next day we drove from Mizque to Sucre with two side trips – one to Santiago and the other to Qiquijana, reaching our final destination long after nightfall. The first stop of the day was for S. albissima growing among white rocks and shale, 12 km from Aiquile at 2625 m (BB354). 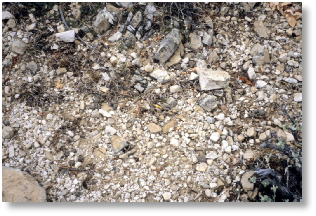 Then a little further along the road to Santiago, S. santiaginiensis, near Kairani at 2450 m. (BB355) 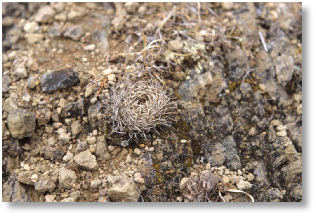 S. swobodae, growing by the hundreds along a rocky outcrop on top of a low ridge. These were typical yellow-spined plants but brown spined plants grew on another ridge across the road (10 km from Aiquile at 2450 m (BB353)). A campesino told us that goats ate the plants when they came into flower.

We returned to Aiquile, then drove past the hospital and across the river, 2 km from Aiquile (2450 m; BB1075) on gentle rocky slope we found Weingartia multispina. The plants were growing amongst dense shrubs by the road (a poor one even by Bolivian standards).

Then on the southern edge of Aiquile (2350 m; BB352) S. mentosa on a hill covered with eucalyptus trees. The plants were growing in deep shade among rocks and leaf litter. By mid-day, we had seen seven new species of cacti and two new genera. When Brian visited this site in 2002, none of these plants remained, although others were found not too far away. 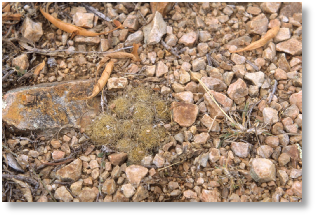 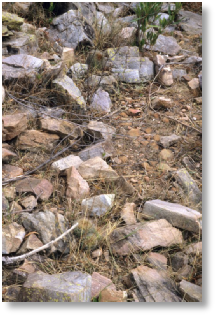 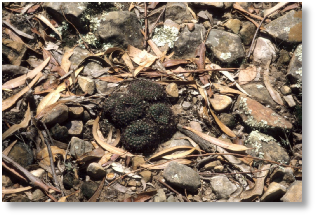 We then had a long drive to Quiquijana, by the school at 2813 m (BB371), we found Parodia prestoensis growing with S. pulchra. Outside the airports, this was the only place we saw other Europeans – four German cactophiles, whom we led to the site, driving down the steepest hill I have ever been on! 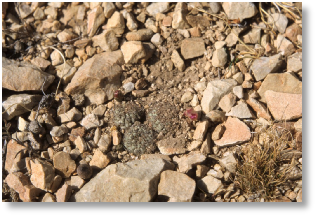 After a pleasant evening with Brian and his wife Patricia at their home in Sucre, we headed for the small and desperately poor village of Millares at 2350 m (BB003). At an opening between two houses, we climbed a steep hill of slate-like rock to find first Gymnocalycium pflanzii v. millaresii. Here W. platygona was growing with growing with Blossfeldia liliputana also. All 3 species are in these photos. 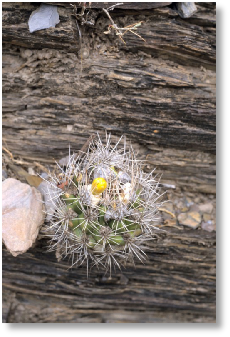 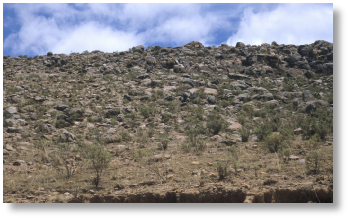 A little further along, S. vazqueziana at the Barranca pass (3090 m, BB346). Only a few plants were found at this site. An old lady armed with a pick arrived and offered to help us dig up plants, in exchange for a tip of course. We declined her help and the plants remained there. She was obviously used to the sight of cactophiles. 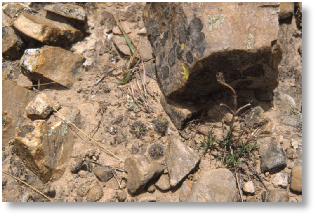 After a good steak dinner and another comfortable night at Brian’s home, we hit the road again in the direction of Zudanez. 8 km from Sucre (3000m, BB343), we encountered S. canigueralii again on a low rocky hillside 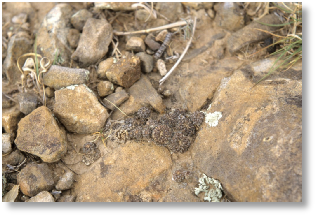 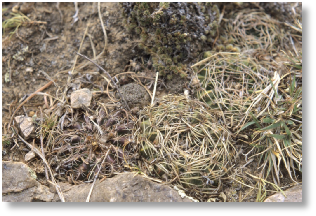 We then made a side trip from Lamboyto via Presto to a site, about 30 km from Presto at 2550 m (BB380). The distance was not too great as the crow flies but took 3 hours to reach because of the poor state of the road (not to mention a problem with a drunken hitch-hiking campesino). However, it was worth it to see S. tarabucoensis v. patriciae. This was only the second expedition to this site, and I was only the third person in the world to see it (after Brian and Ralph Hillman). The plants were hard to find among the rocks and leaf litter on a hillside covered in low-growing shrubs (1-1.5 m tall). Brian has since found another site where the plants are more abundant. 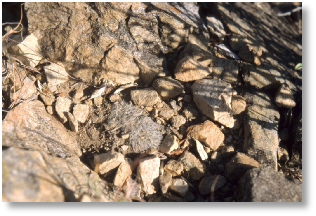 On the way back, we found S. gemmae, 5 km along the road, growing on the top of a rocky outcrop at 2750 m (BB378). Soon after this we had our third puncture of the trip, fording a stream. This was our longest day on the road, because of hold-ups on the way back caused by a truck that couldn’t get round the bends. 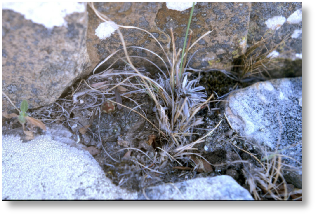 Two days and many new cactus species later on the road from Zudanez to Valle Grande, we found S. crispata about 6.0 km from Nuevo Mundo at 2320m (BB1079). This was hard to find on a rocky outcrop on the top a small hill. 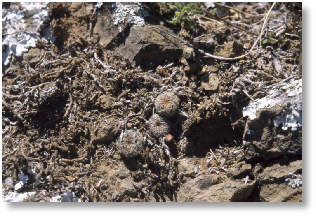 After spending the night at a good hotel in Valle Grande, we headed east and 7.5 km (1900 m, BB229) out of the town we reached the habitat of S. langeri. This needed the longest trek of our trip, about 500 m to the foot of the hill then a climb to the very top where plants grew in deep sandy soil. As usual, we just missed flowering. 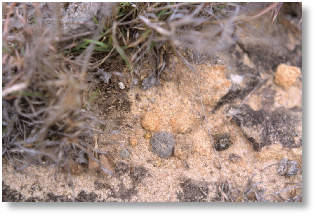 We were now on the road back to Santa Cruz and the airport. The day was overcast unfortunately, and we were re-tracing out steps part of the way from Mataral. At a site 5 km east of Mataral at 1525 m (BB1082), we found W. pulquinensis was growing on the side of a hill. They were growing with Gymnocalycium zegarrae, Cleistocacti and Neoraimondias in the shade of trees. Each species seemed to grow at a different altitude with the Weingartias highest up. 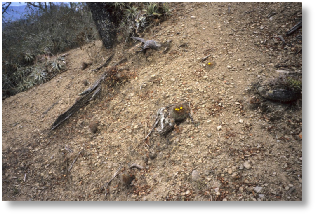